Did we ever imagine limes could be so expensive we would think twice about making a G&T, daiquiri, margarita, mojito, cosmopolitan? Is this the end of the lime enhanced cocktail as we know it? 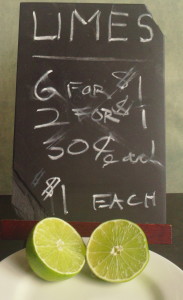 Drought, the Arctic Vortex, and Mexican drug cartels are to blame for shortages and higher prices, according to news reports. Only a small amount — fewer then 5 percent — of limes consumed in the United States are produced here. The rest come from Mexico where drug cartels have put a strangle hold on lime producers, demanding and getting ransoms for each market-bound truck load. And if the farmers don’t pay, they are often killed.

Adding death to the cocktail recipe is a downer. But are we not a people who have learned to overcome, to adapt, to boycott? Yes, we are.

Here are a few suggestions to consider while we wait for prices to drop.

During the next weeks, we will offer cocktail recipes using substitutes during this time of the Limited Limes.

And as a chaser, we’ll talk about the whiskey shortage soon.