The Martini was first made:
A – during the Gold Rush in the California town of Martinez
B – by a San Francisco bartender for a customer going to Martinez
C – by a bartender named Martini or Martinez in an unnamed city
D – none of the above

One thing about the Martini is certain: Whatever was served way back when ain’t what’s served when you ask for a Martini today. And to traditionalists – who want a “real” Martini, a “classic” Martini, “the perfect” Martini – we say there has been too much gin, vodka, vermouth, and flavorings poured to go back. Let’s take the Martini to the new millenium!

But let’s abide by a few general conventions: 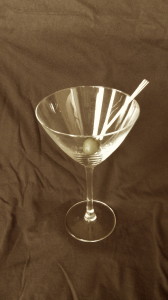 We’ve taken a running start with Spasibo, vodka with an underpinning of Tuaca and orange bitters. For other mydailycocktails in this category, search Martini Monday on the site.

If you’re interested in where the Martini might have come from or what’s happened to it since then, here’s some recommended reading.

The Martini Book: The First, the Last, the Only True Cocktail

by Sally Ann Berk
A good “starter” book to the Martini. Provides the essentials. Most of the book is an alphabetical list of drinks.

The Little Black Book of Martinis: The Essential Guide to the King of Cocktails

by Nannette Stone
This spiral bound, pocket-sized guide is all dressed up with quotes and even etiquette tips. More than 80 recipes cover the traditional and the adventurous; plus, there are a few words on curing the Martini hangover.

The Martini: An Illustrated History of an American Classic

by Barnaby Conrad III
First to acknowledge the broad appeal of the Martini, this is a favored volume for its mixture of history, myth, quoted personalities and traditional recipes for the drink H. L. Mencken called “the only American invention as perfect as a sonnet.”