Put older and oldest together in the brewing and distilling world and you get something brand new. Tito’s lays claim to being the oldest legal distillery in Texas and Spoetzl Brewery, in Shiner, Texas, has been bottling Shiner Beer since 1909. One variety of Shiner, now a year-round favorite, is Redbird, a brew flavored with a touch of Ruby Red grapefruit and a hint of ginger. 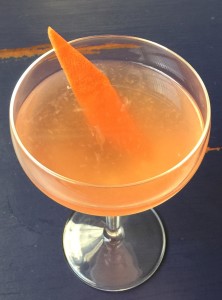 Muddle the vodka and grapefruit in as mixing glass. Add several ice cubes and stir for until thoroughly chilled. Add the Redbird, stir twice. Strain into a chilled cocktail glass. Garnish with a grapefruit peel.