Family remedies, particularly those having a compelling story, always seem to work — even if the cure is a matter of faith. This remedy originally called for soaking the raisins in gin and storing the bottle under the kitchen sink. Taken in small doses it was a grandfather’s acclaimed treatment for arthritis. We don’t know if it’s the alcohol or the raisins, but we always feel rather agile after a dose or two. We’ve created a quick raisin vodka recipe, instead of one with gin. 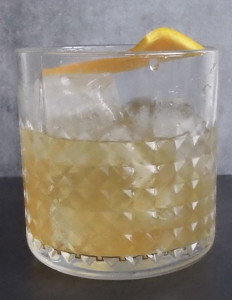 Pour all the ingredients into an old-fashioned glass with several ice cubes. Stir twice. Garnish with an orange twist.

Place all the ingredients except the vodka in a sauce pan and bring to a simmer. Stir until sugar is dissolved. Remove from the heat and cool for several minutes. Pour raisins and syrup into a mason jar. Add the vodka. Seal and store in a cool place for 3 days.