Our cocktail for the final match of the 2014 World Cup is also the last of Rum Week drinks. The Rio Sour is what happens when a Pisco Sour recipe falls into Brazilian hands. Sugar cane-based cachaça makes its home in Brazil, where up to 1.5 billion liters are produced annually — and only 1 percent is exported, mostly to Europe. Cachaça ranks third in the world, behind vodka and soju (a rice distillate popular in China), as a consumed alcoholic spirit. We have to assume that the 2014 World Cup has boosted production and consumption. 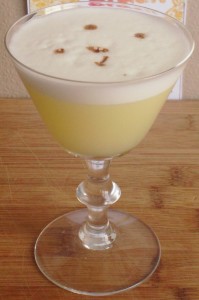 Pour the cachaça, pineapple juice and egg white in an empty cocktail shaker. Shake vigorously for 15 seconds. Add several ice cubes and shake for another 15 seconds. Strain into a chilled cocktail glass. Top with 3 to 4 drops of balsamic vinegar.