Marshall Tito, Yugoslavia’s long time leader until his death in 1980, was born Josep Broz. This cocktail uses slivovitz, a clear plum distillate from the Balkans and southeastern Europe. Slivovitz, on its own, is not easy medicine. It’s a bit harsh, but so was Tito. Like the former Yugoslavia, this cocktail is an amalgam. The recipe is for two drinks: Tito apparently never drank alone. 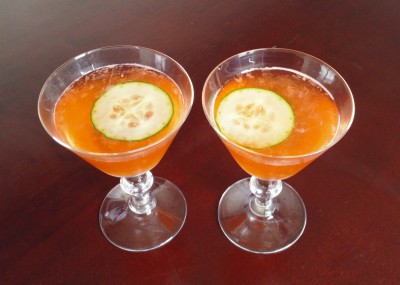 Muddle 3 cucumber slice and the Aperol in the bottom of a cocktail shaker. Add ice and silvovitz. Shake vigorously until very cold. Strain into a chilled cocktail glasses. Float a cucumber slice in each glass.

Tasting notes: Popular in Eastern European regions, Slivovitz is an unknown taste to many westerners, and an acquired taste for others. The cucumber and Aperol soften slivovitz’s sharp edges.