By popular demand: Crackling along the Northern Pacific, past the western mountains, lives the rivalry of San Francisco and Seattle. Twins in many ways, the jostling between the City and her northern sibling boils over on the football field. Bridge the difference between “twinemies” and celebrate their gridiron face-off today for the NFC title: mix an original Pacific Rim’d, a gin-based cocktail with lashings of tangerine and the vanilla-citrus flavors of Tuaca liqueur. 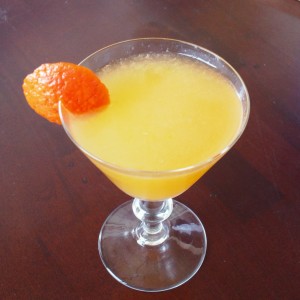 Pour all the ingredients into an  ice-filled cocktail shaker. Shake vigorously while chanting your city’s name. Strain into a chilled cocktail glass. Run a circular slice of tangerine peel around the rim, then notch the peel enough to leave on and echo the sunset along the Pacific Rim.

Tasting notes: Easy, yet sophisticated and complex. Layers of flavor and a hint of spice. Fresh tangerine juice makes the difference. 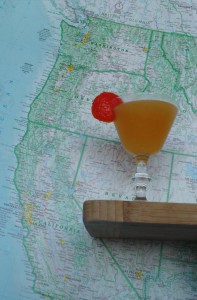 Bridge the difference between “twinemies” San Francisco and Seattle.

Origin: This original MDC cocktail was inspired by San Francisco Chronicle columnist Ann Killion’s piece on the “twinemy” rivalry between fans of the San Francisco 49ers and the Seattle Seahawks, not to mention between the two cities themselves. Each part of the cocktail has meaning: Gin is the primary spirit in honor of its resurgence among craft distillers, exemplified on the west coast; tangerine because it is intense like the rivalry; Tuaca both for its excellence and its snob appeal; and the circular garnish for the setting sun along the Pacific Rim. Last but not least: it is delicious. Use your favorite gin, use fresh Tangerine juice, track down some Tuaca, and cheer your team on.

How are fans handling the contest?
Some are Sleepless in Seattle

. Others are hanging their Gryffindor-coloured San Francisco 49ers House Banners